OUR CHRISTMAS SHOW 2019
The school held it's annual Christmas show on Thursday the 12th of December at 7pm. We had two shows this year entitled 'The Wriggly Nativity' and 'Is Christmas Cancelled?' It proved to be a great night with all pupils displaying their dramatical and musical talents.
OUR CHRISTMAS SHOW - 'ELVES ON STRIKE' 2018
On Thursday the 13th of December we had a great day performing our show for grandparents, siblings and members of the community. That evening we performed again for parents and siblings, the concert went so well that we had a party afterwards while parents relaxed and had a cup of tea. All the pupils hard work paid off as they were super on the night. Well done to all.
CHRISTMAS CONCERT 2017
On Thursday 14th December the school held its annual Christmas concert. This year’s show was full of singing and dancing. It was a great performance. Well done to all the pupils who put so much effort into preparing for the show.

CHRISTMAS SHOW 2016
Well done to all pupils who worked hard at performing a fantastic Christmas Show. All their hard work and commitment paid off on the night. It was a very enjoyable night had by all. 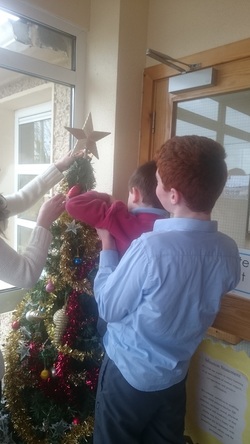 It's that time of year when everyone works together to decorate the school for Christmas. Pictures below is the oldest pupil in the school helping the youngest put the star on the top of the Christmas tree. When we finished putting up all the decorations we sang Christmas Carols around the tree.
﻿﻿Carol Singing 2015
﻿﻿Carol Singing 2014﻿﻿
It was great to see all pupils of St. Kieran's NS up on stage singing and playing different instruments at the KDA Christmas Fair.

﻿Our Christmas Nativity 2014
﻿
Powered by