For Engineers Week 2020 students visited Birr Castle for an engineering workshop. They learned the history and science behind a rocket launch, designed and launched their own rockets and had an incredible time doing so. 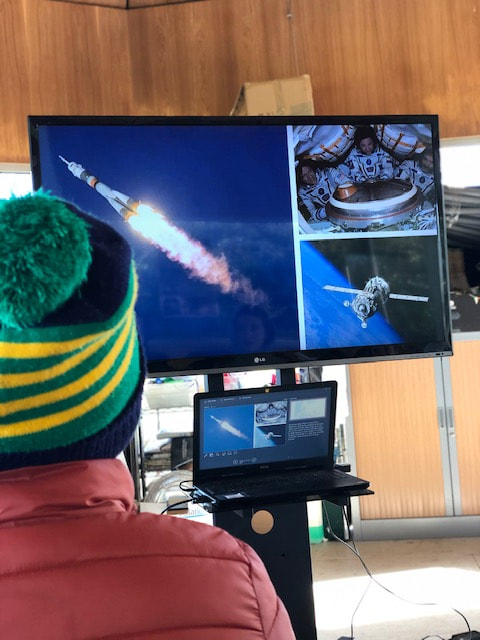 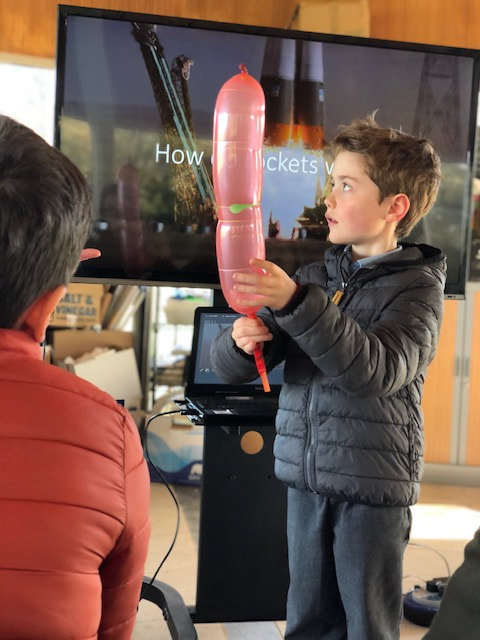 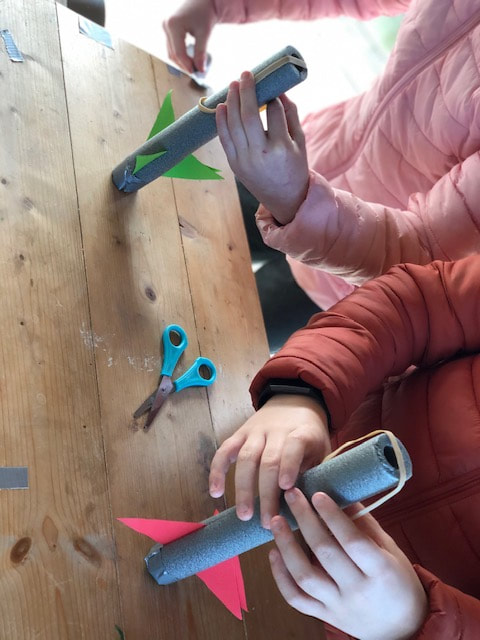 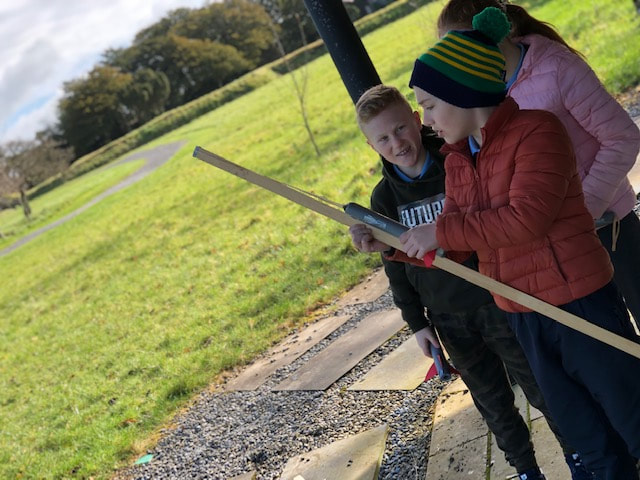 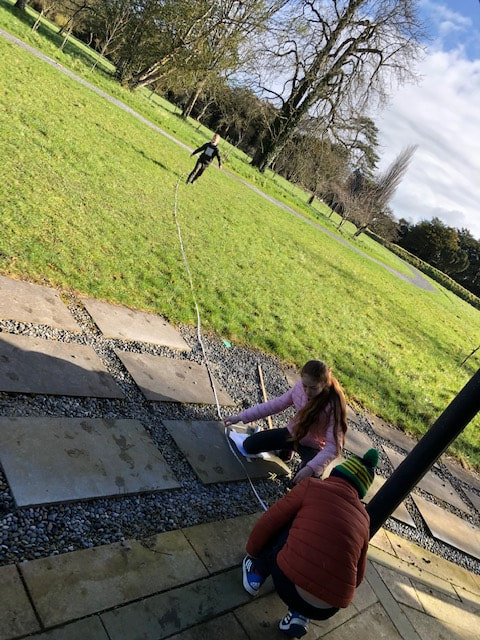 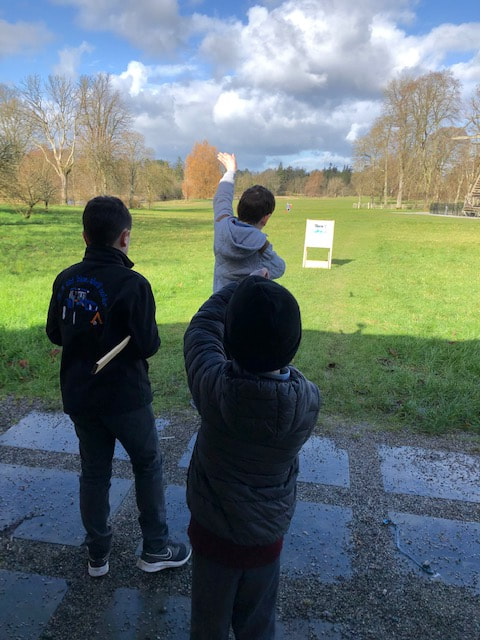 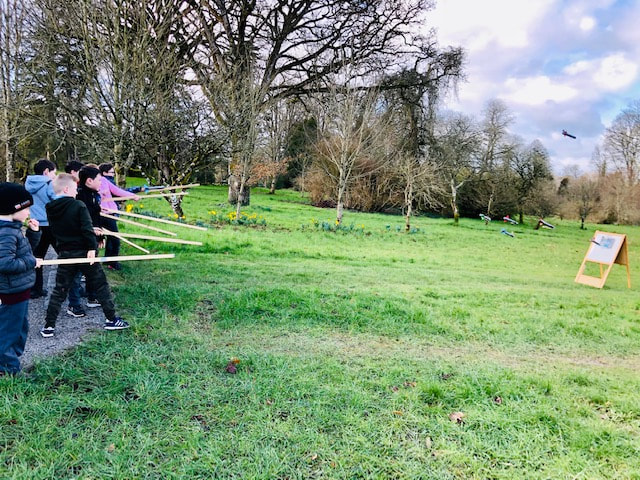 With over 300 eye-popping interactive science and STEM experiences, our day at the Explorium was phenomenal! Students visited the amazing Gravity Rooms, the Live Science Show, the G Force, and the Lightening show to name but a few. Students explored  the interactive activities which improved understanding of scientific concepts and encouraged curiosity in all students from Juniors up the 5th class.

Bricks 4 Kids came to our school to give a Lego workshop based on  planes. Students learned about the Wright Brothers who were both designers and engineers. They discussed the first successful flight, created planes using Lego and then attached  motors for movement. Students had the opportunity to customize their planes and engage in the engineering process through Lego. This was a fun and exciting way to learn about the engineering process!

Students explored various lines and angles in maths recently. They brainstormed different  jobs, such as an engineer,  where knowledge of lines and angles would be necessary to be successful. To demonstrate their understanding, students became engineers and had to design an object using K'nex that incorporated what they learned. It was brilliant to see the pupils using their math vocabulary and applying their skills in a real-life situation. Have a look at some of the fabulous creations. 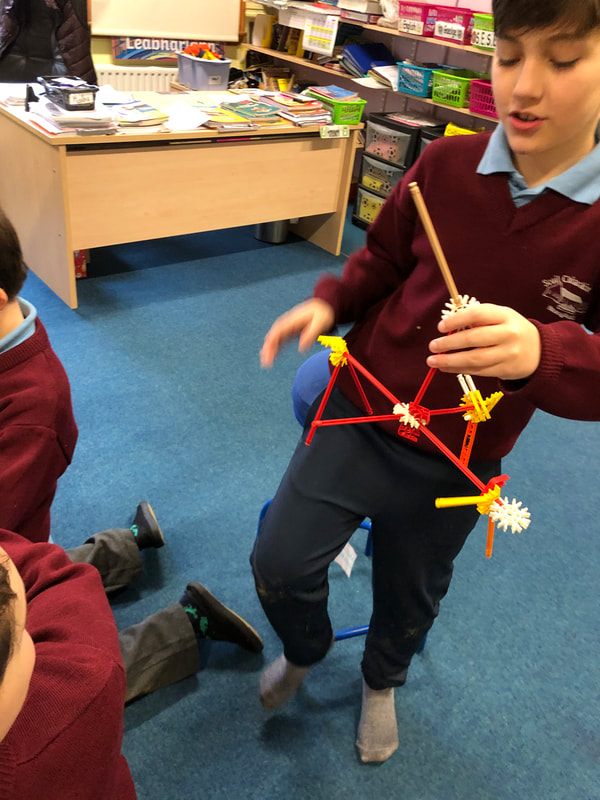 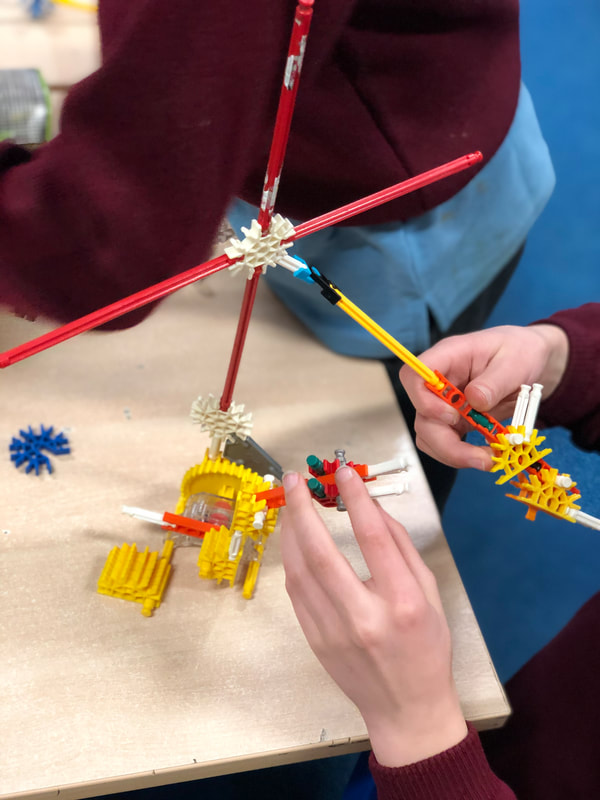 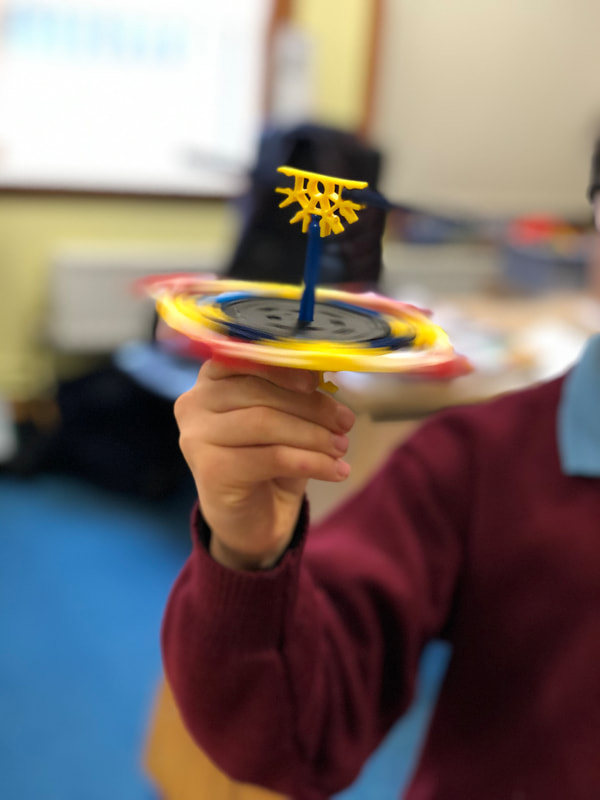 In connection with the 'Farm to Fork' initiative in the school where pupils made soup from locally sources vegetables, pupils also used this as an opportunity to be creative. Students designed an insulated container using different materials such as cling film, cardboard, tinfoil, Styrofoam etc. to keep their soup hot. They tested their soup and recorded the temperature every five minutes for half an hour. The container that kept the soup the hottest after the thirty minutes was the winner of our competition. The winning container used a combination of bubble wrap and Styrofoam, both of which are excellent insulators.

Using pizza boxes, black paper, cling film, tinfoil and newspaper, pupils made their very own solar oven. Students had been learning about heat transfer, conductors and insulators and they put their knowledge to the test. The tinfoil reflected  sunlight into the box which was sealed with clingfilm. This plastic "window" worked like a greenhouse roof, allowing (direct and reflected) sunlight to pass into the box, while also retaining heat. The black paper attracted/absorbed the heat and the newspaper acted as an insulator along the inside of the box It was a great way of using solar energy.

This has been the most exciting S.T.E.M project so far! The students created a village using Lego, then devised a cunning story line to use for our Stop Motion project. Stop Motion requires numerous pictures being taken and played as a slideshow in order to create a movie.   The students were extremely patient and worked well as a group as they had to take over 100 pictures of their Lego. This is just a snippet of what they have created: 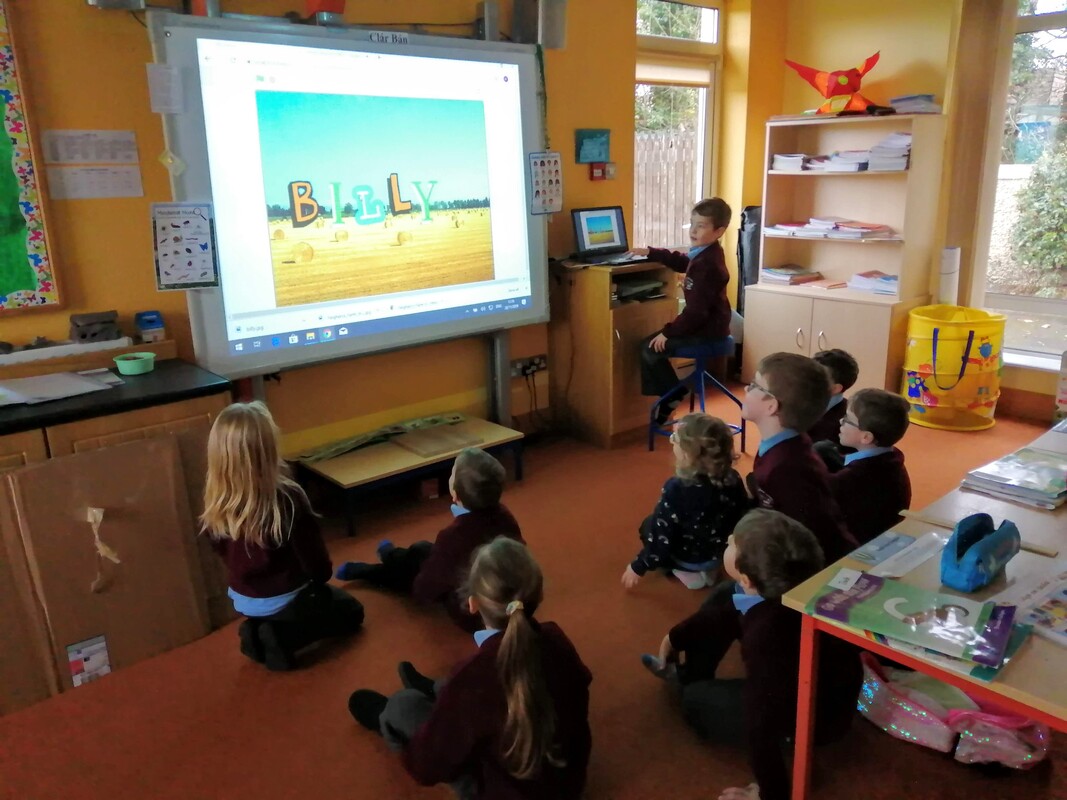 Pupils got creative making their own fairy house.  Pupils used lots of natural materials from our woodlands. The senior room were a great help to the junior pupils during the task. All the fairy houses look great. 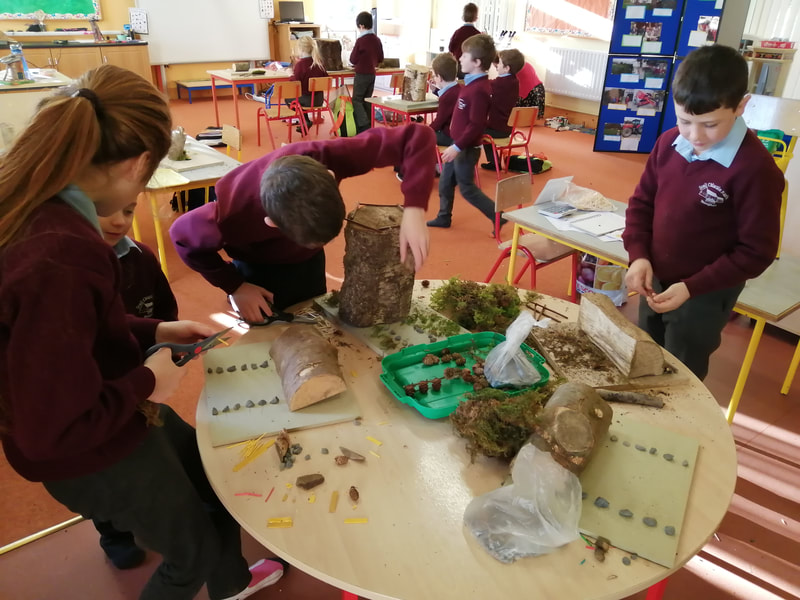 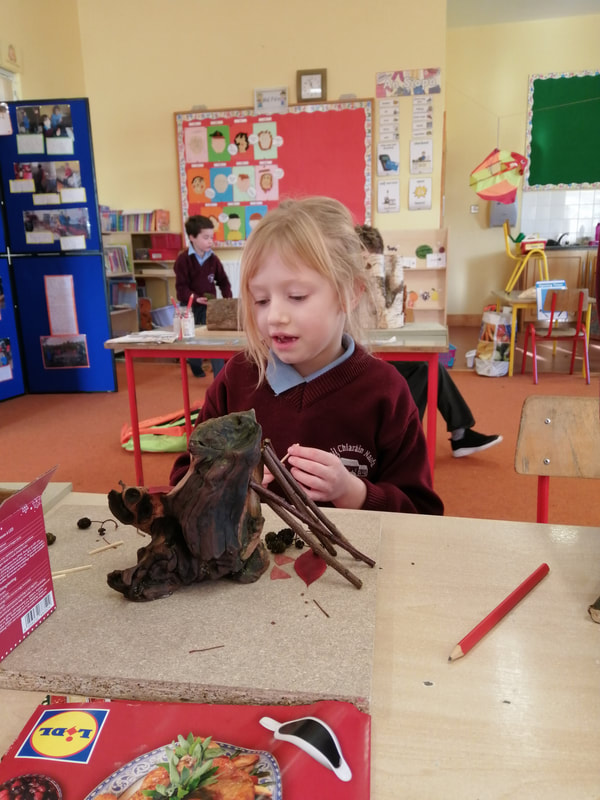 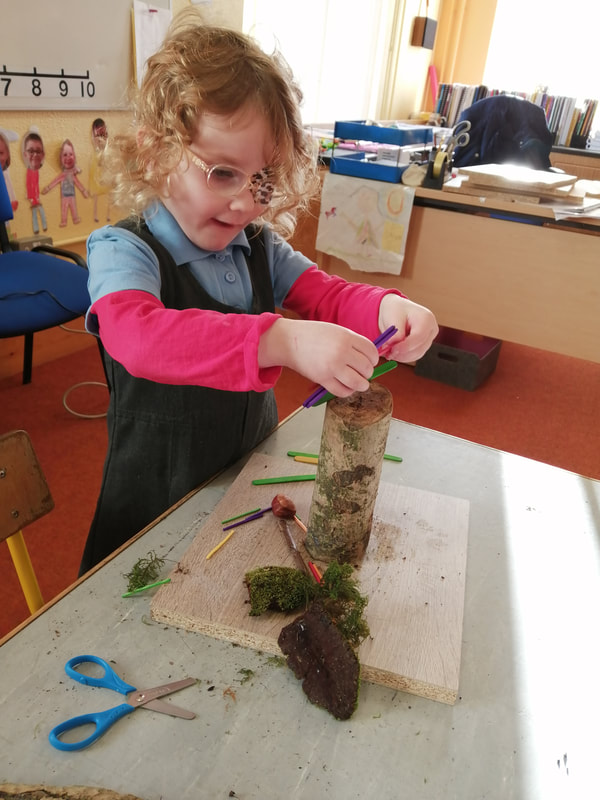 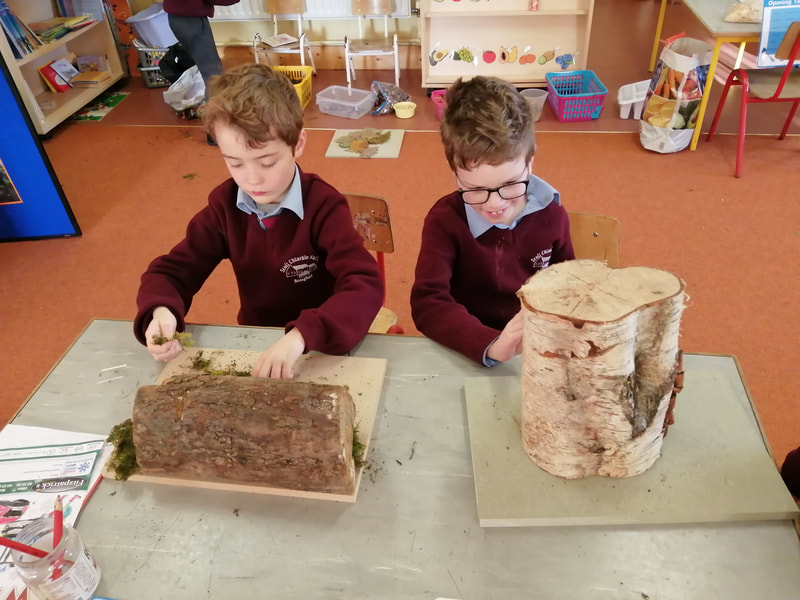 During October, the students in the senior room experimented with forces such as gravity and air resistance. Working collaboratively, the students had to design a parachute and a hot air balloon using various resources such as cardboard, ribbon, tape, balloons and black bin bags. After discussing and creating their designs, they predicted which object would fall to the ground first and why.  The students had to ensure that the test was fair which meant that the height and time at which the objects were dropped had to be the exact same. The children discovered that the parachute caught a lot of air (called drag) so they concluded that although gravity pulled both objects to the ground, the parachute fell at a slower pace and had a softer landing than the hot air balloon. 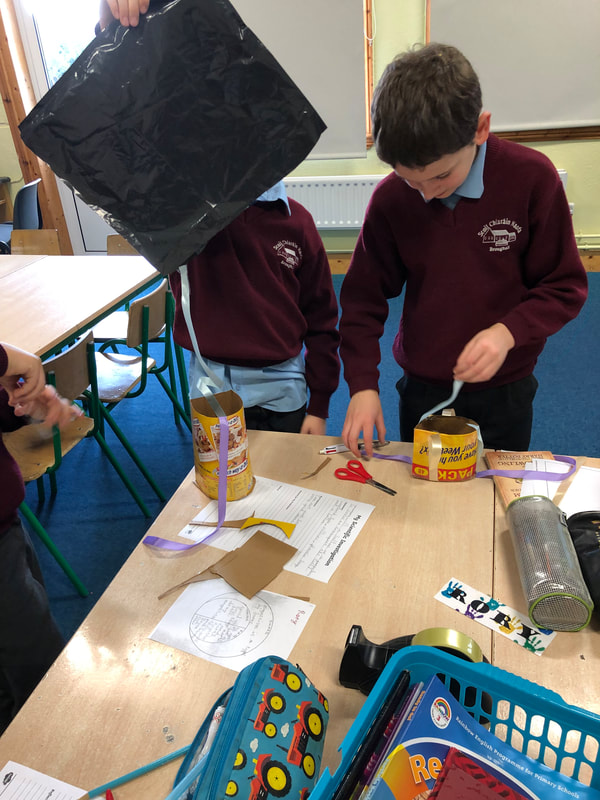 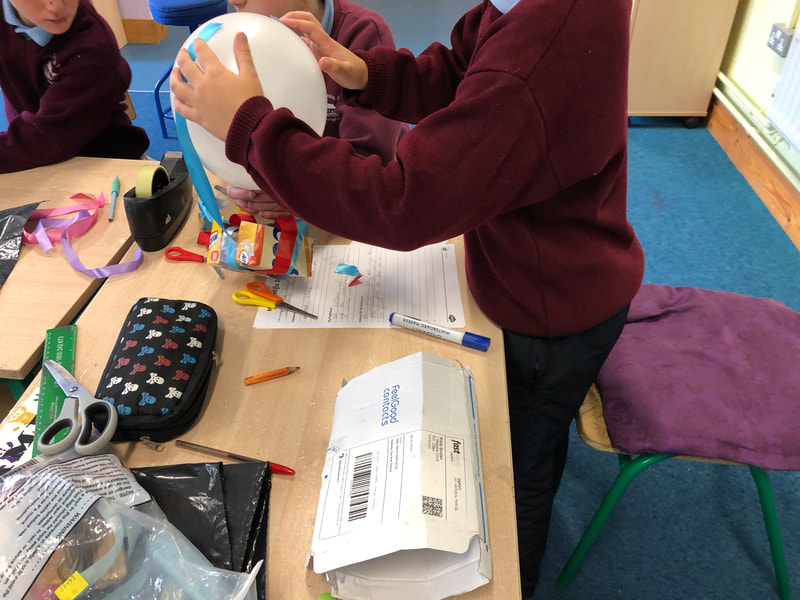 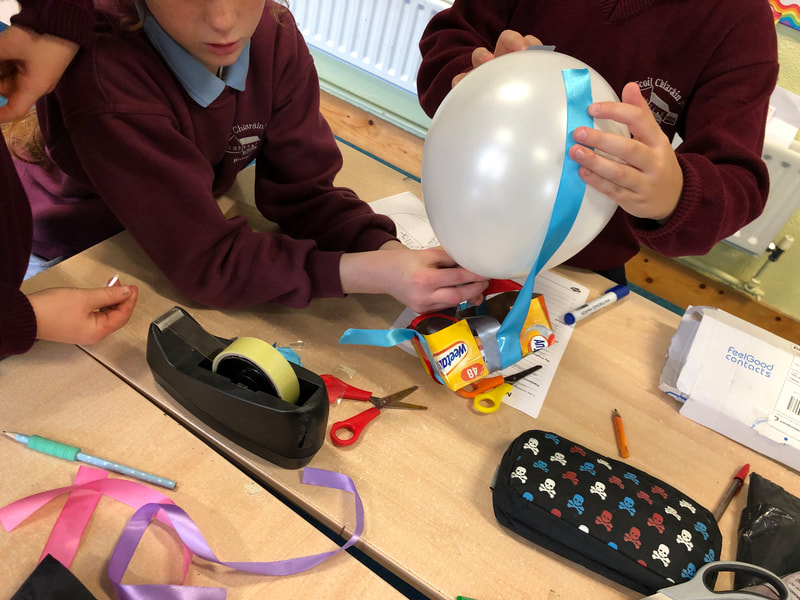 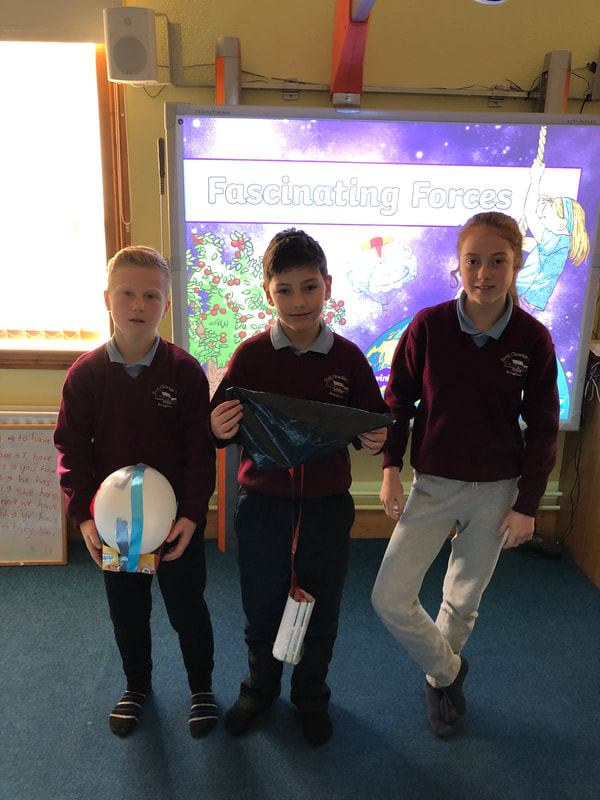 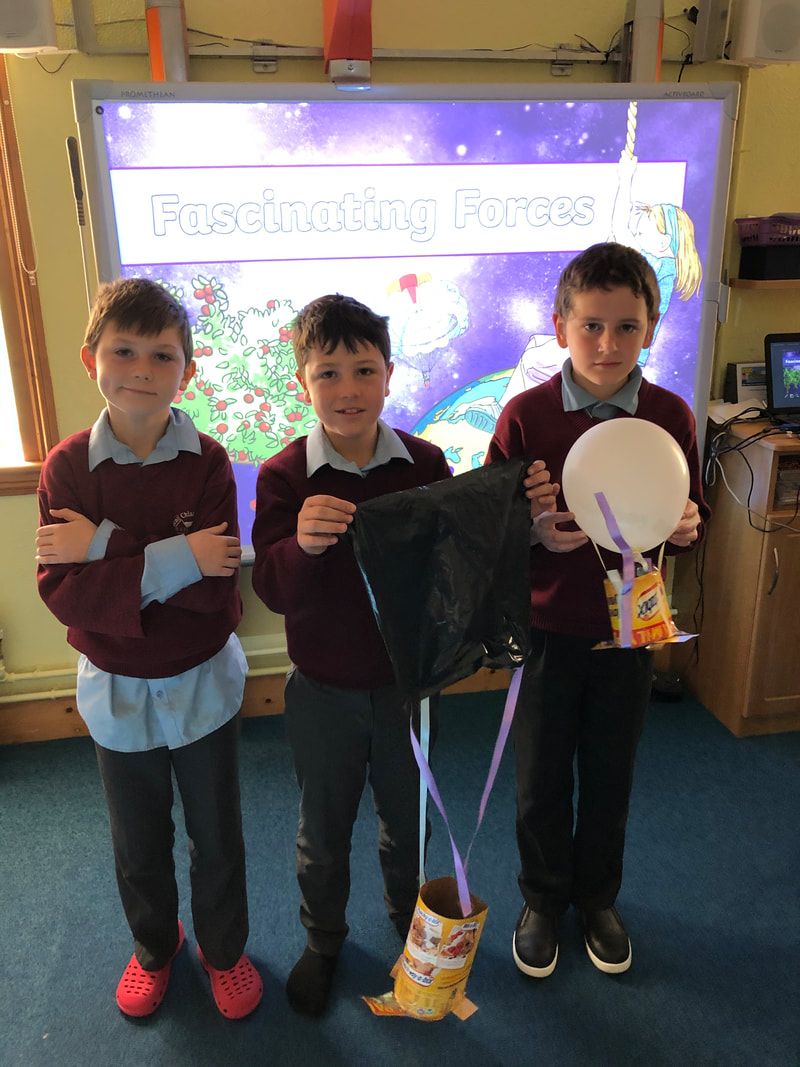 All pupils attended Athlone IT to participate in a show entitled 'Science Magic'. It was great to see them participating in the experiments. Pupils thoroughly enjoyed the day. Thanks to our BOM for fully funding all costs associated with the day. 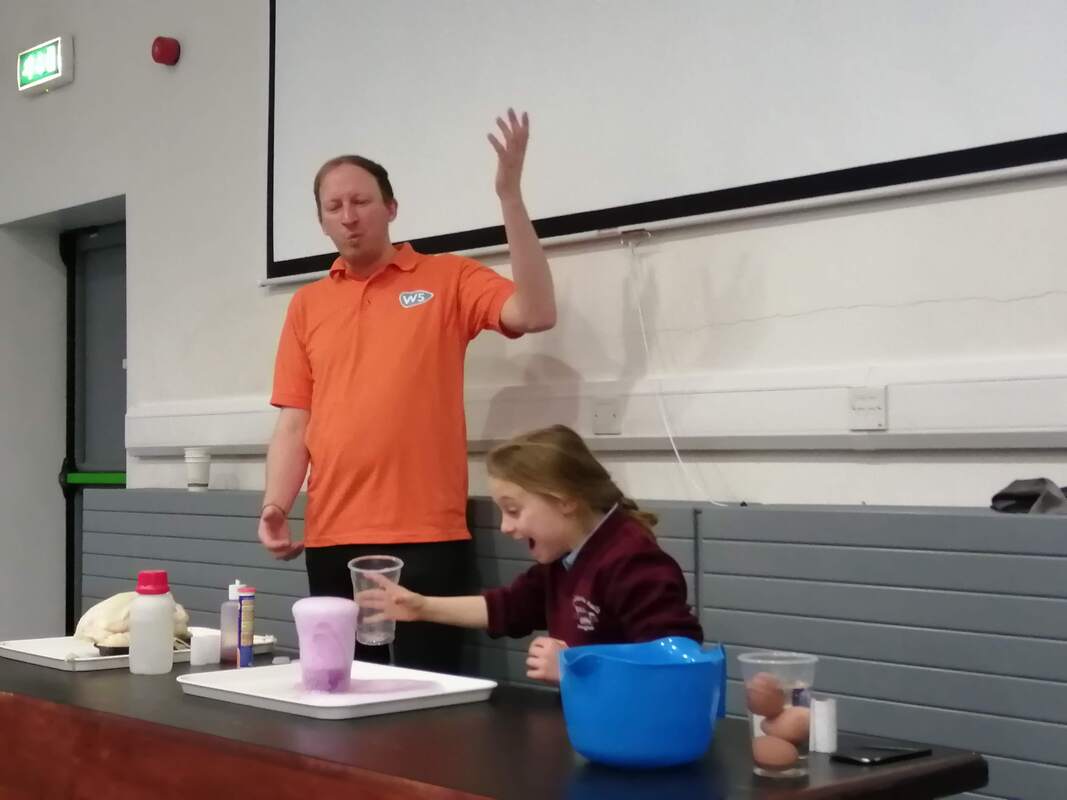 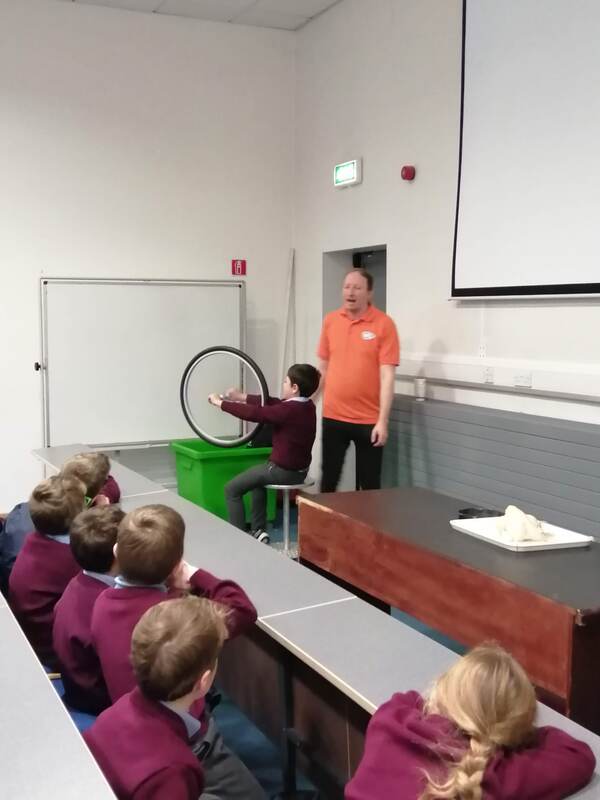 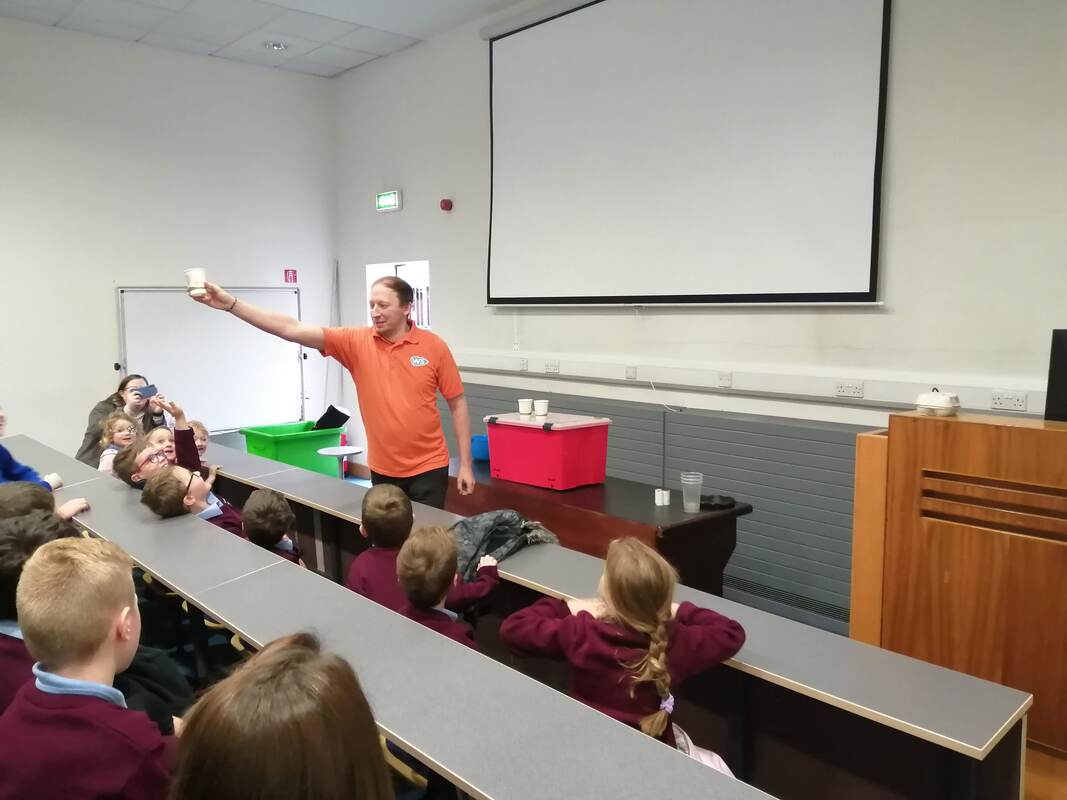 This week we were busy learning about all the different minibeasts that live around our school. The best to learn is to have hands on experience so we went on a minibeast hunt.

LOOK AT OUR HOT AIR bALLOONS. 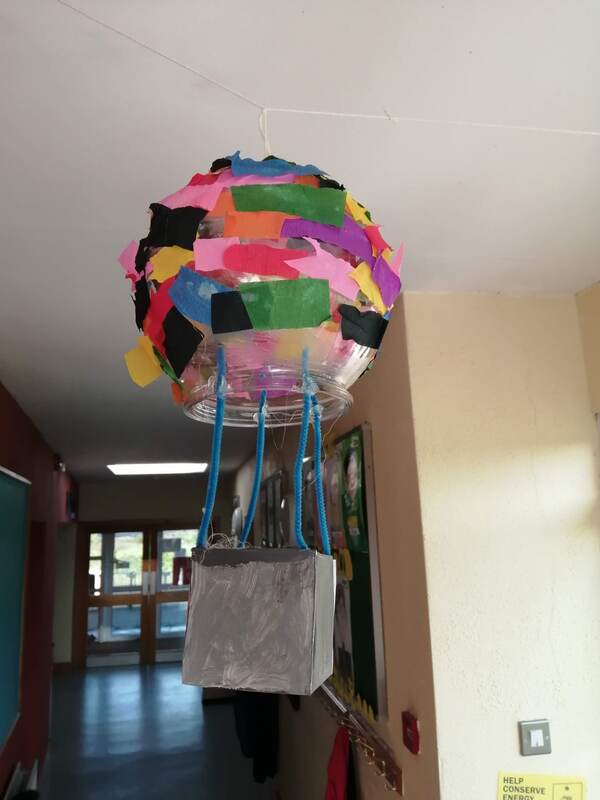 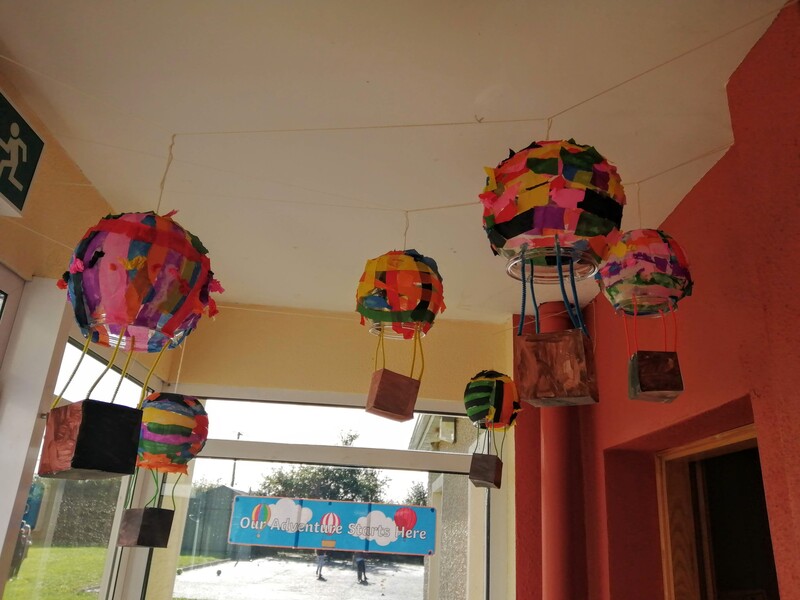 ​The boys and girls in Broughall NS were treated to a fantastic learning experience on Friday the 27th of September. Phil McCheyne and his team brought their hot air balloon to Broughall NS. Phil and his team had been participating in the Irish Hot Air Ballooning Championships in Birr Castle and kindly agreed to take time out of their busy schedule and visit us. The children were fascinated as to how the hot air balloon operated. Phil and his team were excellent in how they answered all the children’s questions and they gave the children a great insight into different factors needed for a hot air balloon to fly. We all learned so much about hot air balloons. All pupils got the opportunity to get into the basket, helped with the laying out of the balloon and actively prepare the balloon for take off. The whole experience exposed the children to a whole range of learning opportunities and we are very thankful to Phil Mc Cheyne and his team for making all this possible. 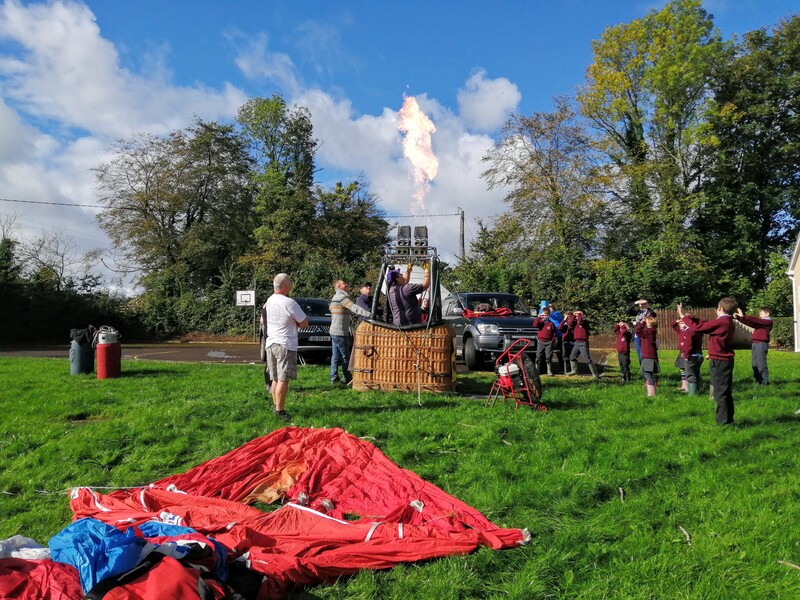 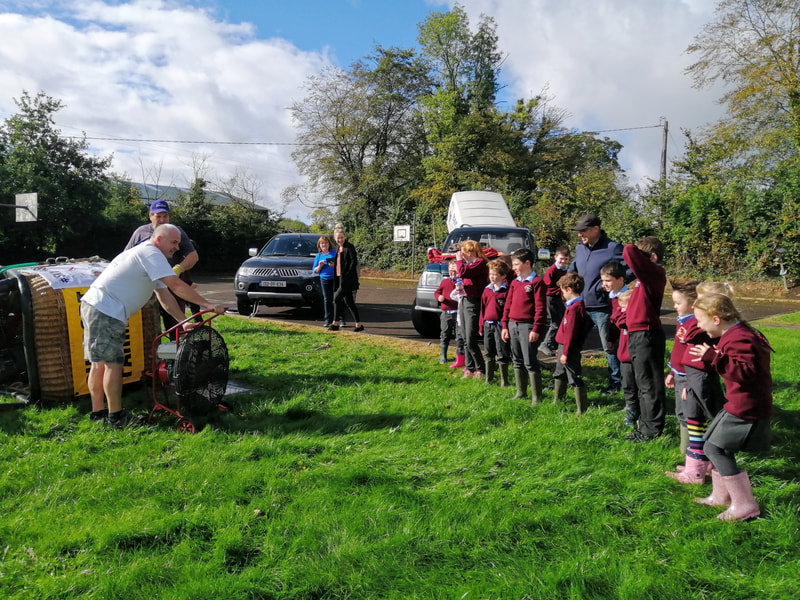 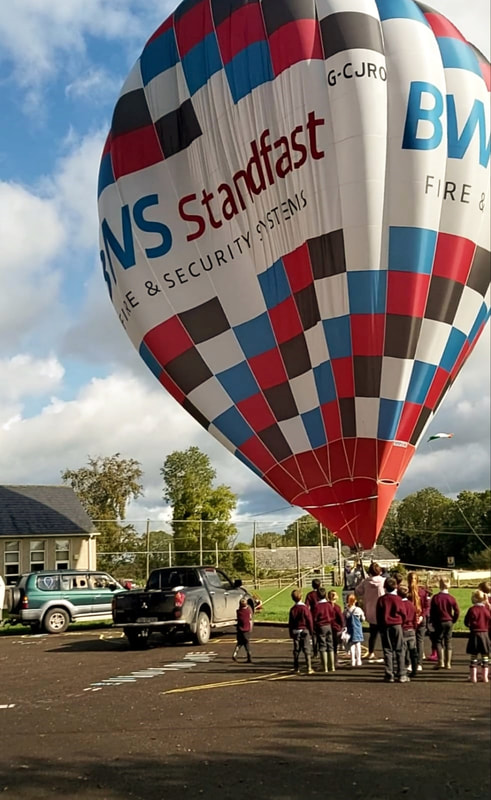